RATED 4.9 STARS ON GOOGLE WITH OVER 1700+ REVIEWS  BUY NOW, PAY LATER WITH UP TO 40 MONTHS INTEREST FREE-FINANCE*

IS THIS THE BIGGEST FORD RANGER RAPTOR?

We never claim to be the best, or come across as the best, but all the work we do we, do to the best of our ability.
Now as you guys have previously seen in other videos, ANOTHER ONE, this customer had his car picked up from ulladulla 230km south of Sydney. 3 hours 4 mins from us in a car. 47 hours walk. but who's counting?
Massive thank you to Greg from Feature Wood Homes for making this possible.
And a warm thank you to the AutoCraze team for making this Ranger Raptor possibly the best ever

Customer Travels 842KM to get AutoCrazed!
An ex New South Welshman become Queenslander Jack Hea put his differences aside and decided to hit up the state he used to call home.
If two grown men can put there differences aside and support a state from another state... then whats going on with our political leaders. Anyway enough of politics down to action.
Shipped brand new all the way from Gold Coast Queensland, travelling a staggering 842km from Queensland all the way down to Silverwater, Sydney. Jack has trusted us here at AutoCraze to Rig Up his brand-new Ford Ranger Raptor X.
After seeing our previous build, the “Black Beast Raptor” he knew exactly what he wanted but only much BIGGER!
Adding a bit of flare Jack wanted something a bit different, he wanted to stand out. He wanted a set of wheels that’s never been put on any other vehicle before.
Introducing the brand-new Nomad Victim wheels, featuring a sleek multi-spoke design. Tough on the inside, stylish on the out.
Sit back relax, and enjoy the whole process of us decking out this Red Stallion.

You've seen us do Raptors before but you ain't never seen something like this. From top to bottom,this is truly a beast to be reckoned with.
We can add all sorts of personalisations to your car, from the custom headrests, to custom wheels, and even better... a whole customised car.
Sit back and enjoy this Raptor X video!

With looks that border on aggressive American styling, yet still refined enough with a European feel means there is not much you need to do to improve it.
Still, for some customers, customisation is key
We love creating bespoke cars for our customised and don’t stop until we get a perfect result.

For great customers, we go out of our way so it was an absolute pleasure picking up James’s new Ranger Raptor from Peter Warren Ford and brining it to AutoCraze HQ for the thing only we know how to do. Lifted another 2 inches, bigger 34 inch tyres, sexy Fuel wheels, front and rear Hamer bar, snorkel and the list goes on. No expense spared, quality build and satisfaction guaranteed. James was wrapped with his Raptor (yeah we’re cheesy like that).

Creating Life long experiences is in the DNA of Autocraze.
How do we know? Richie has brought to us not 1, not 2 but 3 cars in the last 3 years, and he isn't the only one. You keep on bring them, we keep on doing them. Whether you order with us over the phone or face to face, the service remains the same top notch quality. we dont cut corners we just turn your dreams into realty.

Nothing more refreshing than knowing the company you choose for your build will go above and beyond with not only customer service but will provide the experience of a life time. Taking a stock 2020 Raptor straight from the factory floor to the Autocraze HQ give it the best treatment of all, the Autocraze treatment! As soon as Oliver picked the car up he called Mo and booked in the build of a lift time. everything from the BIG items like the bull bar and wheels and tyres to the small details like the smoked tail lights, to complete the look.

We can take the world most boring cars and we can turn them into F**KEN BEASTS, and to top it all up, we can do it better than anyone in the industry. You know what to do, hit the message button, hit the like button, dial the digits and get in contact with us, to turn your dreams into reality.

Introducing The CRUSHER
Taking it one step further even in the smallest details, Is what we do best.
Doing jobs from your mates is never easy, especially when you work out with them on the daily. Daniel has been excited since the keys were dropped off.
Mo was on a mission to not let Daniel know any details on the car and to keep him on his toes, guessing and being excited on how his Raptor will look like. Clearly seen on the video Daniel wasn't disappointed, and Mo didn't fail his mission
Each customer deserves the EXTRA care, and we always provide.

Introducing The CRUSHER
When Peter walked through the door, we had something very special in mind. we wanted to go to town and that's exactly what we did.
You've seen us do Raptors before but you ain't never seen something like this. From top to bottom, this is truly a beast to be reckoned with, and as such we gave Peter the Ultimate AutoCraze Treatment.

I want to get my car BUILT ! 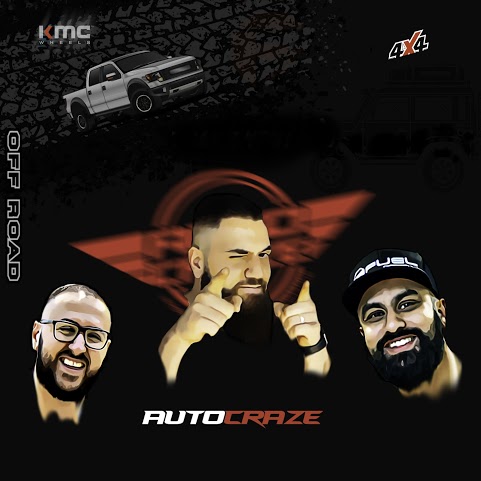 Want your car to look this good?
Let us know by filling the form below